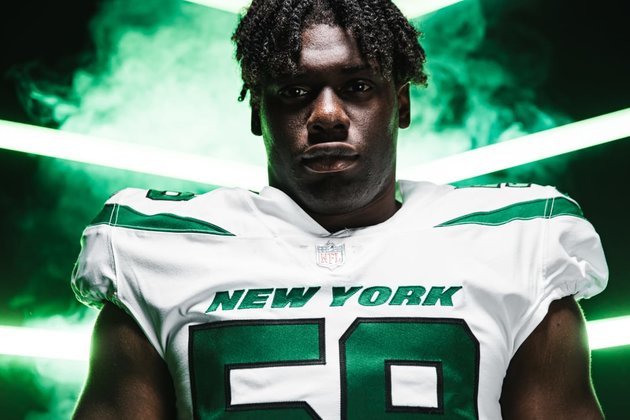 Throughout the offseason, NewYorkJets.com reporters Eric Allen, Ethan Greenberg, Randy Lange and Caroline Hendershot will each give their predictions to a series of questions regarding this year's Jets.

Today's question: How many sacks and takeaways will the Jets get in 2022 season?

EA: Last season, the Jets had 14 takeaways and 33 sacks, which placed them 31st and tied for 25th in league rankings. The takeaway statistic is far more important than the sack number because you can force quarterbacks into mistakes with pressure and hits. The Jets will be significantly improved in both categories in the second season in the Robert Saleh/Jeff Ulbrich system. Familiarity is a plus, but the Jets will also head to training camp with a lot more pieces up front and in the back end. Carl Lawson is expected back healthy, the Jets signed Jacob Martin in free agency, and they also added Jermaine Johnson and Micheal Clemons in the draft. At cornerback, rookie Ahmad "Sauce" Gardner and veteran D.J. Reed are going to embrace the challenge of going 1-on-1 with any receiver. This D-line and the back end will depend on each other. Saleh said last August: "That's what we all gear into, sacks, sacks, sacks, but when you're disrupting the quarterback, you're disrupting the game. It's a two-way street, though. I've said it before, the D-line's job is to disrupt the quarterback. The backend's job is to make sure that quarterback hitches before playing tight, aggressive coverage. If that ball hitches, if that quarterback hitches, looking to No. 2, No. 3, No. 4, that's where the D-line comes back into play and makes them pay a price for holding onto it." At minimum, I see the Jets sack number going up by 10 to 43 and a takeaway rise from 8 to 22. There is no reason this defense can't get to the middle of the pack in taking away the ball. Last season, three teams tied for 14th in the NFL with 22 takeaways.

EG: There's no reason the Jets' sack total shouldn't increase by double digits in 2022. A healthy Carl Lawson alone could account for close to, if not more, than 10 sacks. That's no guarantee, but he was the team's best player in training camp last season, primed for what seemed to be a career year. Lawson's presence should open up things for DT Quinnen Williams, who could see more 1-on-1s in 2022. Robert Saleh said in the spring that John Franklin-Myers' best spot to win was inside and he should see more pass-rush reps on the interior of the D-line with the additions on the outside. The Green & White added DEs Jacob Martin and Vinny Curry in free agency along with Jermaine Johnson and Micheal Clemons in the draft. Johnson accounted for 12 sacks at Florida State last season and Saleh described him as the most pro ready among the draft prospects, which should mean he will make an immediate impact for the Jets. Takeaways are difficult to project, but with the influx of talent along the DL and in the secondary, the Jets should be a faster team in Year 2 of Jeff Ulbrich's system. It will allow players to play more freely and result in more turnovers. The secondary received a big makeover with CBs D.J. Reed and Sauce Gardner, along with safety Jordan Whitehead. I think a double-digit increase, like sacks, would be a big step for the defense, and an attainable one.

RL: For sacks, let's consider the Jets' recent history alongside that of Robert Saleh's previous 49ers defenses. The Jets' D had 33 sacks last season, their seventh straight with fewer than 40 sacks. Saleh's Niners, on the other hand, improved from 30 sacks in 2017 to 37 the next year to 48 the year after. So with Carl Lawson back in action and with Quinnen Williams, John Franklin-Myers, rookies Jermaine Johnson and Micheal Clemons and others champing at the bit to rush the QB, I can see a jump to 42 or 43 sacks, which would be the Jets' most since 45 in 2014. Takeaways are trickier. The Niners never lit it up under Saleh takeaway-wise, with a high of 27 in 2019. The Jets, meanwhile, had 14 takeaways last season and no more than 21 in any of the past six seasons. A leap to 30 would be outstanding, with the Green & White reaching that level from 2008-11 and again in '15. But a more modest yet still optimistic figure would be 25 takeaways, along with a continuation of their reduced giveaway rate - led by QB Zach Wilson's better ball protection, they committed only 5 giveaways in their last eight games last season - to give the Jets their first plus turnover margin since the aforementioned 2015.

CH: I'm going to say the Jets will have 45 sacks this season and 22 takeaways in the 2022 season. That would mean an increase of 12 sacks and 8 takeaways from last season (33 sacks and 14 takeaways). Last season the Jets were missing Carl Lawson and Vinny Curry who are both returning this year. Not only that, but Quinnen Williams should benefit from Lawson's presence, John Franklin-Myers returns after a career-year, and the free agent and draft additions of Jordan Whitehead, D.J. Reed, Jakob Martin, Sauce Gardner, Jermaine Johnson, and Micheal Clemmons make this defensive group that much stronger. In January after the season ended, JFM, who led the team with 6 sacks, said "Next year we will all understand the system a lot better, we will all understand how each other plays, so I'm just looking forward to the future of this D-line." And he is right. In the second year of understanding the defense and adding key players, I think that the Jets can make a big jump from last season where they ranked 25th in sacks and 31st in takeaways in the NFL.